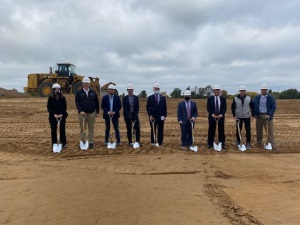 This spec building will be the first of its kind in Battle Creek, and a complement to Fort  Custer Industrial Park. The park, which is one of the largest industrial parks in Michigan,  is home to 85 companies. This includes 25 international manufacturers representing  Austria, Canada, Denmark, Germany, and Japan. In total, approximately 13,600 people  are employed in the park.

When complete, the building located at 211 Watkins Road will comprise 270,000 square  feet of space, including 7,000 square feet of office space. It will feature 32-foot ceilings,  50-foot-by-50-foot column spacing, and 18 truck docks, with additional knock-outs for  future development. Announced in March 2020, the building is the first of three planned  for the site and is expected to be completed in the spring of 2021.

Jamie Clark, president of Clark Logic, looks forward to the contribution of the project to  the overall economic growth of the region. Clark said, “One day at a time. One project at  a time. That is how you build a future.”

Central Manufacturing Services was founded in 1969 by James “Big Jim” Clark. His  vision was … “We are a company looking into the future.” That vision carries on today.  Through the years, the journey has evolved into several notable companies including:  I-Trailer; J&L Express; and Team Manufacturing Services with a fleet of over 50 trucks  and 3,000 trailers. Today, under the umbrella of Clark Logic, the organization has also  transformed into a real estate development business with a footprint of over 3 million  square feet throughout Southwest Michigan and northern Indiana – inclusive of  warehousing and work space utilized by several nationally known companies. Our  winning team culture combined with an exceptional workforce are proud to be serving  this area for over 50 years. To learn more about pursuing a career at Clark Logic,  please visit our website at: ClarkLogic.com. Clark Logic, a visionary company — driven  by its people.

Michigan to distribute $58.5 million in grants to businesses

Relief is coming to Michigan businesses after a board last week approved $58.5 million in …