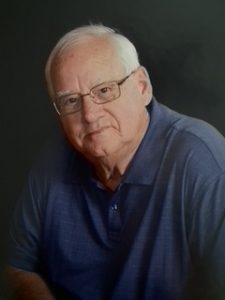 Earle worked for the St. Joseph County Road Commission for over 23 years, retiring as an Area Foreman in 2006.  He also enjoyed driving truck over the years for local farmers and other companies.  Earle was an original member of the group who started the Pee Wee baseball program in the 1970s. You could find him coaching or umpiring baseball and/or softball for a large portion of his life. He also loved shooting pool with his son, remodeling and building projects, playing cards with his friends, finding a great fishing spot, as well as spending time with his grandchildren and great grandchildren. During retirement, he enjoyed traveling to warmer climates visiting his daughter who is also serving in the Army.

According to his wishes, cremation has taken place.  Relatives and friends will be received Friday, October 23 from 5 to 7 PM at Eley Funeral Home in  Centreville.  Memorial services will be held on Saturday, October 24 at 11:00 AM at St. Paul’s Lutheran Church in Centreville with Pastor Robert Bartz officiating.  Military graveside services will take place at Fort Custer National Cemetery at a later date.

Memorial contributions can be given to Elara Caring Hospice.  Online messages can be left for the family at www.eleyfuneralhomes.com.