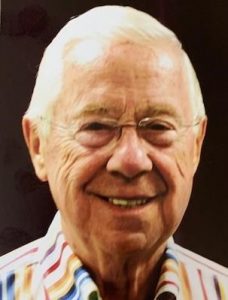 Jerry Mitchell died peacefully on September 29, 2020, surrounded by his loving family. He is survived by his loving wife of 63 years, June; his sons, Michael (Gail), Jeffrey, Thomas (Denise), and Robert (Debbie); his grandchildren, Amanda, Joel, Zachary, Rylie, Madison, and Lexi; as well as seven beautiful great-grandchildren. Jerry was born in Three Rivers on January 7, 1935. He was an outstanding athlete in four sports throughout his years at Three Rivers High School and excelled in basketball earning a full athletic scholarship to play at the University of Michigan. He later transferred and continued to play basketball at Western Michigan University in Kalamazoo, where he met the love of his life, June, then graduated with a Bachelor of Science degree in 1957. Jerry and June raised their family in Three Rivers, where Jerry owned a home building company (Chippewa Homes) and a Century 21 Real Estate Office. He sold the businesses in 1981 and moved his family to Naples, Florida where he continued his professional career in real estate, focusing on golf course communities.

Jerry was a devout Christian and a member of the First Church of the Nazarene where he served as a trustee for Olivet Nazarene University. In Naples, Jerry served on the church board, the building committee, sang in the choir, and served weekly at St. Matthews House. He invited Jesus Christ into his life at the age of 8 and with God’s grace, has remained faithful for a lifetime.