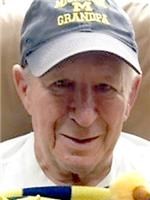 Larry Duane Briggs, otherwise known as “Mr. DQ, ” “Briggsie” and “Lion,” passed away peacefully on Monday, Oct. 12, 2020, at the age of 79, after a long battle with Parkinson’s disease.
Larry was always equipped with a joke that would unquestionably paint a smile on anyone’s face, so it was unsurprising that, even in his last days here on earth, he was still cracking jokes. Those who were lucky enough to have known him knew he was a compassionate person who would undoubtedly put others needs before his own, time and time again.
Larry was the proud owner of four Dairy Queen establishments, enjoyed golfing with his buddies at Klinger Lake, spending cold winters in Naples, Fla., and warm summers on the lake with his wife and dog Zoey, and cheering on the University of Michigan football team, dressed head-to-toe in his Michigan sweatsuit (Go, Blue!). Larry happily attended every one of his kids’ and grandchildren’s sporting events with a bag full of Tootsie Pops in hand.
Larry was born June 15, 1941, to Dorothy Irene (Motter) Briggs and LD Briggs in Three Rivers. Larry graduated in 1960 from Three Rivers High School, where he was very active in athletics. Larry continued on to play football for Ferris State University and graduated from Western Michigan University with a bachelor’s degree in business and psychology. On Aug. 5, 1962, he married his lifelong sweetheart, Judy Briggs (Dobrowolski), and has been happily married for 58 years since.
Larry is survived by his wife, Judy; daughter and son-in-law Laura and Rick Penner; brother Doug Briggs; son Jeffrey Briggs; grandkids Alea and Ian Penner, Cassidy (Penner) Haas and her husband Patrick, Preston Briggs and his mother Pat, and his great-grandson Patrick Haas IV (Phin).
Preceding Larry in death were his parents, LD and Dorothy Briggs; sister-in-law Nancy; and daughter Cindy.
Larry started his working career as a manager at Delco Remy in Anderson, Ind. He then continued his career working for General Foods in Battle Creek and Columbia, Md., and then for Cargill in Seaford, Del. After a job opportunity opened up in Sturgis, they moved to Robinhood Trail and he worked for Shell Company and owned and operated Trophy House. In 1981, Larry and Judy opened the first Dairy Queen, which they owned for more than 30 years. Larry was honored to serve as an elected board member of International Dairy Queen Association for 10 years and received countless Dairy Queen operator awards. Other business ventures included being an owner and operator of Patterson’s Supper Club.
Visitation will take place from 4 to 8 p.m. Friday, Oct. 23 at Rosenberg Chapel of Hackman’s Family Funeral Homes, 807 E. Chicago Road, Sturgis. If you plan to attend, please bring a mask with you, as they are required. The funeral will be a private, family event due to COVID-19 restrictions; however, it will be livestreamed for those who wish to attend remotely at 11 a.m. Saturday, Oct. 24. Stay tuned for the link on Hackman’s Family Funeral Home website. We encourage those who knew Larry to share memories and pictures with us on the “Dedication to Larry Briggs” Facebook page. To honor Larry’s fight against Parkinson’s disease, instead of flowers, the family requests donations be made to Michigan Parkinson Foundation or to Hospice of Michigan.