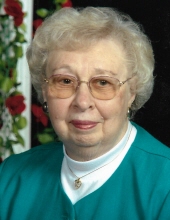 Mary Louise Schemahorn, age 90, of Sturgis, was reunited with her husband, Ernie, Monday afternoon, Sept. 28, 2020.
She was born April 5, 1930, in LaGrange, a daughter of the late Lloyd and Martha (Rush) Keck.
Mary had resided in Sturgis since 1954. Her early life was spent in LaGrange, where she was a graduate of LaGrange High School with the class of 1949.
On April 3, 1954, she married Keith Ernest Schemahorn in Howe. He preceded her in death July 7, 2016.
Mary retired from the Sturgis Public Schools following many years of dedicated employment as a “lunch lady” at Sturgis Middle School. She also had been employed at Montgomery Ward and along with her husband owned and operated Sturgis Motor Sales. Mary always had a love for children. She operated a nursery school in her basement and enjoyed caring for many children in her home and for a time worked at Humpty Dumpty Nursery School.
She was a member of First Baptist Church in Sturgis, where she participated in church activities. Mary found her love for cooking at a very young age, beginning at her grandmother’s side preparing meals for the threshers on the farm. She especially enjoyed cooking for family and friends and those in need of a meal. Mary took pride in keeping a clean, well-maintained home. She enjoyed gardening and always found time to take a moment and send a card or note to family and friends. Mary’s greatest joy was time spent with her family, especially her grandson Tyler.
She is survived by a daughter, Shelly (Mark) Luce of Sturgis; a grandson, Tyler (Brooke) Luce of West Bloomfield; a sister, Linda Jones of LaGrange; a brother, Edward Keck of Bryan, Ohio; a sister-in-law, Beverly Keck of Bryan, Ohio; and several nieces and nephews.
She was preceded in death by her husband; her parents; two brothers, J.C. Keck and Lee Keck; a brother-in-law, David Jones; and a sister-in-law, Marge Keck.
The family wishes to extend a big “Howdy Doody” on behalf of Mary to the caring staff at Thurston Woods Village.
The family will receive friends and loved ones from noon to 2 p.m. Saturday at First Baptist Church, 1050 E. Fawn River Road, Sturgis. A graveside service and burial will be held at 3 p.m. Saturday at Oak Lawn Cemetery in Sturgis. The Rev. Matt Taylor will officiate.
Hackman Family Funeral Homes of Sturgis is entrusted with the arrangements.
The family suggests those wishing to make a memorial donation in Mrs. Schemahorn’s memory consider Thurston Woods Village, 307 N. Franks Ave., Sturgis, MI 49091.