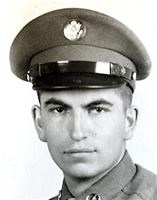 Roger A. Webb, age 92, of Sturgis, passed away on Monday, Oct. 12, 2020, at home, surrounded by his loving family.
Roger was born in Grand Rapids, the youngest son of Robert P. Webb and Adelaide M. King.
At age 17, he followed his brothers, David and Leslie, into the service of our country. Roger served in the Coast Guard, Merchant Marines and then U.S. Army during the Korean War. He fought in the Battle of Chosin Reservoir and was one of the “Chosin Few.” He was awarded two Bronze Stars.
He was employed by Kirsch Company for 30 years, retiring in 1982.
In 1991, he married Betty Lunger. Together, they took many travels to Europe, especially England, to visit relatives and the local pubs. He was known to enjoy a proper cup of tea and a nip of brandy. Roger also enjoyed woodworking, boating and spending time with children and grandchildren.
He is survived by his wife, Betty; children Cathleen Webb, Christine (Bill) Morrow, Diane (Matt) Schrock and Tim (Donna) Hostetler; grandchildren Carolyn Morrow, Patrick Morrow, William Morrow, Lee Webb, Daniel Schrock and Sarah (Allen) Oumedian; and three great-grandchildren.
He was preceded in death by his parents; two brothers; a son; and a grandson.
Internment will be on Oct. 26, 2020, at Fort Custer National Cemetary, Augusta, with full military honors.
To share condolences and memories, please visit avinkcremation.com.