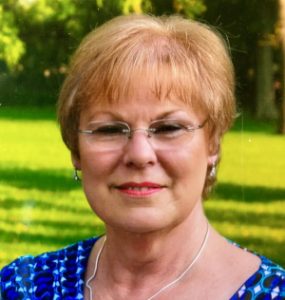 Sandra Kay Cooley was welcomed into the arms of her Lord and Savior Jesus Christ on Thursday, October 15, 2020.

She was the firstborn bundle of joy to Don and Irene Wardle in June 1948, followed by Luann Holverstott in 1950 and Janine English in 1953. Sandra lived a Christian life exuding a friendly loving personality and never wanted for a list of dear friends. When Bill Cooley entered her life in 1965, she knew they were destined to have a life together. They married in September 1968.

The next 25 years brought much joy and excitement to her life as an officer’s wife and mother. Bill had joined the Army officer program, attending OCS, and flight school. There were times of separation, most lengthy, while Bill served in Vietnam. During those times she would return to Three Rivers to be by family and friends. Several years after Bill’s return from Vietnam, they were blessed with the arrival of their son, Mark Andrew. The Army life was great for the Cooley family. Most of their career was spent stateside apart from a three-year tour in Japan where Sandra was given the opportunity to teach Japanese children how to read English. After 23 years Bill retired from the Army and Sandra started a new phase in her life. During the military years they formed lifelong bonds with their friends, still keeping in touch over the past 50 years.

Sandra’s home was her pride, joy and hobby. She had that keen eye and ability to decorate their homes to be comfortable and beautiful. Her talents also put her into a challenging position decorating the Fish Lake Bible Church where they have attended over 20 years. Then when the revamping of the church started, she was honored to sit on the planning of the interior design. Sandra worked outside the home at a local groomer in Denver and experienced retail sales at Mervyns, but her favorite was helping her brother-in-law mow the Park Township cemeteries. She loved the fresh air and the sun kissed glow on her skin. After five seasons she retired.

Two years ago, wedding bells rang for Mark and Kristin and his instant family. Mark was blessed with two darling girls, Lauren, age 9, and Morgan, age 7. The union was a dream come true for Sandra and Bill. At age 70 she heard the words she had longed to hear, “I love you, Grandma Sandy.”

Sandra was preceded in death by her parents, Don and Irene Wardle. She was survived by her husband, Bill, son Mark (Kristin), sisters Luann (Marv) and Janine (Tom), granddaughters, Lauren and Morgan, and her aunt Louise Rieth.

Sandra will be missed by her elementary school chums, her dear friends Bonnie and Jim Mobley, and little “sister” Autumn Wicks.

Services for Sandra Cooley will be held at the Fish Lake Bible Church on Friday, October 30, 2020, with visitation from 10:00 a.m. to noon, service and meal to follow. Pastor Tim Brondyke will officiate.

Private family graveside service will be held at another time.

If you wish to remember Sandra, consider Hospice of Southwest Michigan; or Fish Lake Bible Church. Envelopes will be available at the church or at Hohner Funeral Home in care of Sandra’s arrangements.