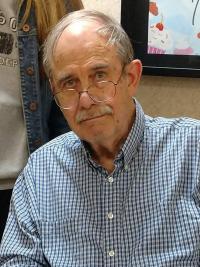 Thomas Gordon Parker, age 80, of Three Rivers, earned his wings and went to be with our Lord on Wednesday, October 28, 2020 after a battle with Parkinson’s and Dementia.

He was the first born son of Chester and Minniebelle (Chapman) Parker. He was born in Kalamazoo on March 16, 1940. He was raised on the family farm north of Schoolcraft.

He graduated from Schoolcraft High School in 1958. He joined the Naval Reserve in November 1957, serving actively from May 1959 to February 1961. He was discharged on November 25, 1963. He attended Ferris State College (Ferris State University) studying Industrial Chemistry.

On January 1, 1960 he married Glenna Jeanne Graves in the Schoolcraft Presbyterian Church. They lived in Schoolcraft, Kalamazoo and finally settled at Fishers Lake, Three Rivers in 1966.

He worked for Protection Products (Champion International) Kalamazoo, Ram Products in Sturgis and ended his working career at Royal Adhesives in South Bend in March 2004. He enjoyed hunting on the family farm, fishing with his brothers and sons and watching his sons, granddaughters, and great-grandchildren play baseball, football and soccer.

He was preceded in death by his parents; brother, Edwin; and great-grandson, Wyatt Turner.

In lieu of flowers, the family requests contributions to the Michael J. Fox Foundation or Hospice of Southwest Michigan. Envelopes will be available at the funeral home.

Visitation will be held Wednesday, November 4, 2020 from 11 a.m. until time of service at noon at Hohner Funeral Home, 1004 Arnold St., Three Rivers. Rev. Brenda Deily will officiate. Interment will follow in Schoolcraft Cemetery.