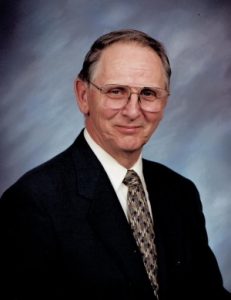 William “Bill” Andrew Walter, age 86, of Three Rivers, passed away Saturday, October 24, 2020. Bill was born November 20, 1933 in Three Rivers, the son of the late William Willis and Eleanor (Schumm) Walter. He graduated from Three Rivers High School in 1953. Bill served his country honorably in the Naval Reserves and later in the U.S. Navy.

After released from the service, Bill began work as a tool and die maker working for Fisher Body for 29 years and also Wells Manufacturing, Production Tooling, and Square D. Bill enjoyed woodworking, stamp collecting, playing golf and was an excellent baseball player in his younger years. Many fond memories are shared of the cottage in Ellsworth, MI. where he and Ruth and family and friends spent many a vacation as well as traveling the states. Bill was an avid and faithful member of the St. Peter’s Evangelical Lutheran Church where he sang in the choir and was always available to lend a helping hand.

Bill’s true love was family, he was a faithful husband, father, and grandfather. His main goal in life was to bring joy and comfort to his wife, children, grandchildren and friends. His selfless service to his family, his church, his work and community will always be remembered by those that knew him.

He was preceded in death by his parents; sister, Roberta Walter; and sister-in-law, Debra Smith.

Visitation will be held Friday, October 30, 2020 from 1:00 p.m. until time of service at 3:00 p.m. at Hohner Funeral Home, with Pastor Robert Bartz officiating. The service will also be livestreamed here. Interment will be held in Moorepark Cemetery following services.

Donations in Bill’s memory may be directed to St. Peter’s Evangelical Lutheran Church.