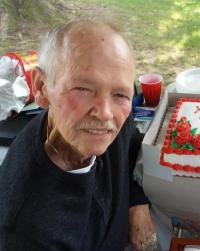 He was born September 24, 1949 in Forrest City, Ark., the son of Alva Lee and Eugenia (Coleman) Mangold.

Billy served his country in the Army 82nd Airborne division, where he guarded the White House during Vietnam. He later spent 48 years driving forklift in the shipping department of manufacturing industries – Weyerhaeuser and Syndicate Systems/Store Fixtures.

He attended Riverside Church, and enjoyed yard work, the casino, garage sales, practice shooting his gun with the kids and grandkids, watching Gunsmoke, and sharing his love with every family member and person he met.

He was preceded in death by his parents; daughter, Angela Mangold; three brothers, Benny Mangold, Eldon Mangold and Roland Mangold; and one sister, Dora King.

Visitation will be held Saturday, November 7, 2020 from 9 to 11 a.m. at Hohner Funeral Home. A private family service will be held later. Interment will be at Riverside Cemetery.

Memorial donations in Billy’s memory may be directed toward Sandra Mangold. Envelopes are available and may be sent to Hohner Funeral Home, P.O. Box 1018, Three Rivers, MI 49093 in care of his arrangements.