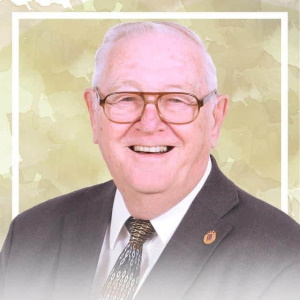 Elwin Donald Ruggles, age 89, of Three Rivers, passed away on Wednesday, November 4, 2020 at his home surrounded by his loving family.

Elwin was born on September 1, 1931 in Three Rivers, the son of Donald and Mary Irene (Martin) Ruggles.

Elwin was a proud graduate of Three Rivers High School, Class of 1949. He attended trade academy school in Waukegan, Illinois for Pest Control in 1959. He completed his Real Estate training and Brokers License in 1971.

Military service to his country began in 1952. He was inducted into the Army on April 16, in Fort Bliss, Texas, and received his honorable discharge having achieved the rank of Sergeant on April 15, 1954.

Elwin married his beloved Beverly Joyce Spade on August 24, 1952 in the 9th Street Methodist Church, Three Rivers, by The Reverend Harold Jacobs. They were high school sweethearts and they were happily married for 68 years. He was a devoted, adoring husband and he cherished every day they had together.

In 1968, Elwin founded a business enterprise with several local partners consisting of Chippewa Homes, Arrowhead Real Estate, and Ruggles Termite Service. In 1971-1972, that enterprise was responsible for developing Tamarac Subdivision, an accomplishment he was very proud of. In subsequent years Arrowhead Real Estate purchased a franchise license and became part of the national Century 21, Inc. He was named Realtor Emeritus of the National Realtor Association and was a member of The St. Joseph County Association of Realtors for 52 years.

Elwin loved Sports! He enjoyed playing golf, tennis, softball, shooting hoops in the driveway, hunting with his beagles, and fishing with friends and family on his pontoon boat at Pleasant Lake. Woodworking, home repair projects and gardening were among his favorite activities, but by far, he adored spoiling his grandchildren and great-grandchildren with abandon.

Elwin was a local Rotary Club member for many years and recognized by Rotary International as a Paul Harris Fellow for distinguished service.

Elwin will be remembered for his kindness, service to church and community, but above all his trademark smile and laugh that filled rooms and hearts!

Extended family who were and are loved dearly; Diane (Krull) Boynton, Chantelle Casey, Mariana Aquino, and most recently Debi Haynes.

He was preceded in death by his parents, brothers Duane and Kenneth, and Beloved daughter-in-law Melody (Shoemaker) Ruggles.

Visitation will be held at Hohner Funeral Home on Sunday, November 8 from 3:00 to 5:00 p.m. with masks required.

Funeral Service will be held at Three Rivers Church of the Nazarene on Monday, November 9 at 11:00 a.m., The Reverend Derl Keefer presiding, also with masks and social distancing in accordance with current public health guidelines.

Memorial donations in Elwin’s name may be directed to Three Rivers Church of the Nazarene Building Fund, Project Share or the charity of your choice.  Envelopes are available at the funeral home.