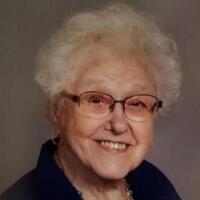 Esther Brouwer, age 97, went home to be with her Lord on Wednesday, November 4, 2020. Esther was born in Berwyn, IL, on July 25, 1923, to John and Louise (Knobloch) Wimmer. She met her first and only boyfriend and love of her life, Harold Brouwer, in their church youth group. Harold joined the U.S. Army in Europe during WWII, while Esther worked, attended Moody Bible Institute, and made wedding plans. Shortly after Harold’s return home, they married on March 23, 1946. As a married couple, they moved to Columbia, S.C., where they furthered their education at Columbia Bible College. They felt called to the ministry, and Esther worked alongside Harold in his education and pastorate, praying with and for him. She was alway an integral part of his ministry serving as a loving pastor’s wife in their churches in Posen, IL, Mansfield, OH, Three Rivers, and Marcellus. Esther was known as a prayer warrior, praying daily for her immediate family, church family, and numerous missionaries. She drew her spiritual strength from her daily time in God’s Word. Esther is survived by her daughters Joy Brouwer and Jean (Jeff) Rus, both of Kalamazoo, and several cousins, nieces, and nephews. She was preceded in death by her beloved husband Harold, her parents, and her brother John. Esther’s Home-Going Ceremony will take place at 1 p.m. on Tuesday, November 10, 2020, at Calvary Bible Church (855 S. Drake Rd, Kalamazoo). Prior to the ceremony, visitation for friends and family will also take place at Calvary Bible Church from 11:30 a.m. to 1:00 p.m. Covid precautionary measures will be in place, including masks and distancing. Immediately following the service, interment will be at Moorepark Cemetery, north of Three Rivers. Friends are welcome to join the family for this brief service. Memorial contributions may be made, in lieu of flowers, to Howardsville Christian School, Marcellus, or Heritage Christian Academy, Kalamazoo.