Two people died in a single-vehicle crash over the weekend in Marcellus Township.

Behnke said a car driven by 69-year-old Marcellus resident Stanley Bridges was traveling north on M-40 when it left the roadway and struck a tree. Bridges and a passenger, 70-year-old Dana Horner, died at the scene.

Investigators said it appears neither Bridges nor Horner were wearing a seatbelt. Behnke said alcohol was not a factor. 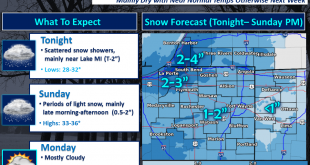