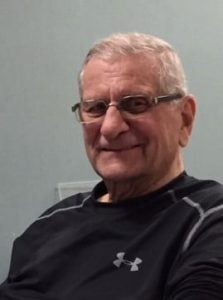 On September 12, 1958 he was united in marriage to Barbara (Smith) Hines. They lived their married life in the Three Rivers area. Gerald served his country in the United States Army from 1959 until his honorable discharge in 1961. While in the service he was on the rifle team and traveled with the team in Europe. He worked at Armstrong Machine Works and retired in 1998 after 32 years.
Gerald studied drafting at Glen Oaks Community College. He enjoyed making wooden toys, doll houses, and game boards. He was a member of Three Rivers Church of the Nazarene where he served on the board, was a Sunday School teacher, and Usher.
Gerald was preceded in passing by his parents, brothers, Ed, Herb, Al, Dennis, and sister Mickie Houser.
He is survived by his wife of sixty-two years, Barbara Hines; son, Scott (Laurie) Hines; two precious granddaughters, Holly and Heidi; sister, Evey Briggs; brother, David Hines.

Cremation has taken place. A private graveside service to honor Gerald will be held at Riverside Cemetery of Three Rivers.