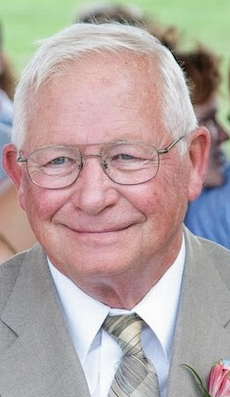 John E. “Jack” Goes, age 82, of Constantine, passed away Sunday, November 8, 2020, at Three Rivers Health. Jack was born in Evansville, Indiana on March 7, 1938, a son of Walter and Nancy (Baker) Goes. He graduated from Highlands High School in Ft. Thomas, Kentucky in 1956. Jack attended Purdue University for 2 years where he played football for the Boilermakers. Jack served in the Navy and was a pilot from November 1961 to March 1963, and was proud to also play football for Navy. He then went on to the University of Kentucky receiving a degree in industrial administration and  engineering in 1966.

On April 6, 1991 he married Helen (Horn) Milliman in Constantine.  Jack was employed in industrial management for Clark Equipment as well as Bronson Plating, which he retired from.

Jack had a generous heart towards his loved ones; he was a  devoted husband and was extremely proud of his children and grandchildren. He took great pride in their accomplishments and took an interest in whatever they were involved in.

Jack had many interests over the years and enjoyed all types of athletics and music. In his younger years he was a member of choirs and later enjoyed playing piano. Whatever he was involved with, he put in an extensive amount of time studying and researching. He was an avid golfer, loved target shooting, raced Trottingbred ponies and Standardbred horses. He was president of the local Trottingbred Club. Jack loved horses; as a younger man he rode and jumped horses in South Carolina where he started a hunt club plus he belonged to hunt clubs in Kentucky and the Battle Creek Hunt Club.

He was preceded in death by his parents, first wife Carol Goes, and step-granddaughter Sadie Hoffert.

Public Visitation will be held from 2 to 4 and 6 to 8 pm on Wednesday, November 11th at Eley Funeral Home in Constantine.  Private funeral services will be held with Pastor Leanette “Lane” Van officiating. Interment will be in the Constantine Township Cemetery. The family requests donations to Constantine United Methodist Church.  Online messages can be left for the family at www.eleyfuneralhomes.com.