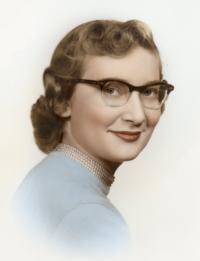 Marilyn Joyce (Fritz) Borton, age 83, of Three Rivers, passed away on Tuesday, November 3, 2020, at Rose Arbor in Kalamazoo, with her family by her side.

Marilyn was born March 7, 1937, in Fulton, Michigan to Donald and Ruth (Knauss) Fritz. As the eldest of four girls, Marilyn grew up helping on the family farm. She was attending Vicksburg High School when she began dating Veryln Borton. Soon after graduation, they were united in marriage. When Verlyn was drafted into the Army, the couple moved to Fort Hood, Texas. While there, their son, Rodney, was born. After the family moved back to Michigan, Marilyn held various jobs, culminating with a long career at James River. Her interests included family, gardening, cooking, and travel.

A private interment will be held at the North Fulton Cemetery. A celebration of Marilyn’s life for family and friends will be scheduled next summer.
The family wishes to express their deep gratitude to the staffs at Bronson Methodist Hospital, Heartland of Three Rivers, and Rose Arbor Hospice. In lieu of flowers, donations may be made to Hospice Care of Southwest Michigan.

While visiting Marilyn’s webpage at www.mccowensecord.com please sign the guestbook by lighting a candle, and/or sharing a memory with the family.

The family is being assisted by the McCowen & Secord Funeral Home; Rupert Durham Chapel -Vicksburg, Michigan.