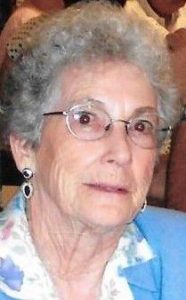 Oma worked as a bookkeeper at Duo-Therm in LaGrange for many years.

She was also a longtime member of First Presbyterian Church in LaGrange.

Surviving Oma is her son and daughter-in-law, DeWayne and Susan Yoder, of Sunnyvale, California; a sister, Ideana Yoder, of Goshen; a brother, Sharron Miller, of White Pigeon,; and many nieces and nephews.

Oma was preceded in death by a daughter, Ada Raynee; her parents; two husbands; a sister, Zayda Wolf; and a brother, Verland Miller.

Funeral services will be private for the family.

Burial will take place at Greenwood Cemetery in LaGrange, and the Rev. Kenneth Weaver will officiate the private services.

There will be a Celebration of Life for Oma announced at a later date.

Memorials may be contributed in Oma’s memory to First Presbyterian Church of LaGrange or Parkview Home Health and Hospice.

Online condolences may be submitted to the family at www.fruripmayfuneralhome.com.