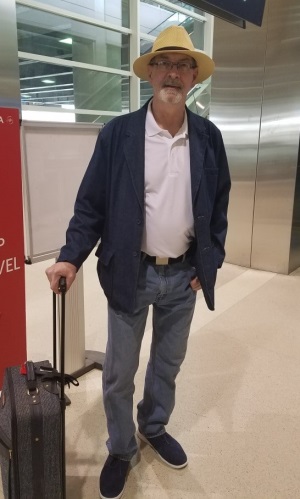 Thomas L. “Knute” Miholer, age 70, passed away at his home on Wednesday, November 4, 2020. He was born in Three Rivers, on December 5, 1949, the son of the late Thomas and Marilyn (Neff) Miholer. Tom was a loving father, grandfather, great-grandfather and friend. He had a great sense of humor, gentle smile and kind personality. Knute, as he was known to his friends, grew up in Three Rivers and was always proud of his community. A graduate of Three Rivers High School, Class of 1968, he was an outstanding athlete, lettering in four sports and was the first to receive the title of Three Rivers Basketball “Mr. Team Supreme.” After graduating, Tom went on to serve our country as a United States Marine. After being honorably discharged he returned to make Three Rivers his home. He worked hard to provide a happy home for his family. When not working he enjoyed hunting, fishing, and golfing. He also shared a love of crossword puzzles with his mother, Marilyn, and was a master at solving them! This was quite possibly due to his knack for witty words and colorful nicknames, which he assigned to those around him. Tom had many friends in the community and enjoyed spending time with them all. He loved to play golf with his brother David, son Zach and “Pa”, and spent many hours playing cards and spending time with special friends Randy, Teddy, Denny and Jim. He believed in the Lord and was an involved member of First United Methodist Church. Being a father, grandfather and great-grandfather brought Tom his greatest joy. His pride in his children and grandchildren was abundant, particularly when it came to sports. He loved attending their sporting events and activities. Big Papa could always be found among the crowd proudly donning their respective teams’ gear from head to toe, and cheering. His family will always remember his listening ear, great advice, and more importantly his incredible love and thoughtfulness. For all those who knew and loved Tom, he leaves behind the memories of a life well lived. He is survived by two children, Zach (Darcy) Miholer and Marissa Miholer; former spouse, Mary (Michael) O’Connor; grandchildren (“lizards”), Dylan and Madisyn Cornish, Charlie, McKenzie, Maycie Miholer, Bailey Miholer-Wortinger, Maliyah and Monae Flowers; great-granddaughter, Maylee Evans; siblings, David (Lisa Armstrong) Miholer and Laurie (Garry Zachritz) Miholer; nieces, Katelyn (Adam Gamez) Zachritz, Whitney (Sarita) Zachritz-Brown, and Alison Zachritz; many close friends. He was also preceded in passing by a daughter, Megan L. Miholer.

A private gathering of family and close friends will be held.

Memorial donations may be made to the Three Rivers High School Athletic Department. Envelopes are available at and may be sent to Hohner Funeral Home, P.O. Box 1018, Three Rivers, MI 49093 in care of his arrangements.