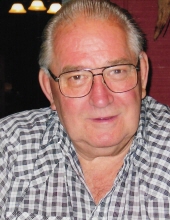 William Dennis Poorman, age 86, of Sturgis, passed away Tuesday evening, December 29, 2020 at Sturgis Hospital.
He was born December 28, 1934 in Sturgis, son of the late Ertis and Clara A. (Reading) Poorman.
He was a lifelong Sturgis resident.
Bill held various jobs but his last and favorite job was transporting the Amish.
He was proud to have served his country in the U.S. Army completing three tours of Duty during the Korean War. Bill was a member of Captain John J. Kelley Post #1355 VFW and past member of Loyal Order of Moose #574. He enjoyed playing Texas Holdem and time with his family. Many will miss seeing him traveling around town on his scooter including Meijer and Walmart where he went nearly every day to have the opportunity to see and converse with others.
He is survived by one daughter: Billie Wells of Sturgis; two step-daughters: Debra Dunlap and Patti Dunlap both of Sturgis; two step-sons: Gary Dunlap and Brett Dunlap both of Sturgis; 16 grandchildren; several great grandchildren and many nieces and nephews.
He was preceded in death by his parents; three daughters: Michelle Dawn Jarratt and Pamela Jean and Valorie Poorman; five sisters: Judy Gross, Leah Marie Bloom, Violet Persing, Edith Harter and Betty Lego.
In accordance with his wishes cremation has taken place. Due to the current condition with the COVID-19 pandemic and the limitations of gatherings a memorial service celebrating and honoring the life of William Dennis Poorman will be held at a later date to be announced.
The Hackman Family Funeral Homes of Sturgis is entrusted with the arrangements.
Memorial donations would be appreciated to the funeral home at P.O. Box 9, Sturgis, MI 49091 to help with expenses.
The obituary is also at www.hackmanfamilyfuneralhomes.com where we encourage relatives and friends to share memories and leave condolences for the family.