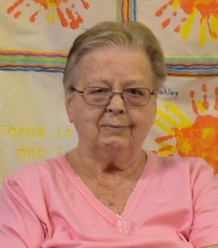 Maxine Arlene Warkentine, age 84, of Hudson, IN and formerly of Mendon, died Wednesday, Dec. 16, 2020 at Cameron Memorial Community Hospital in Angola. She was born in Leonidas on Jan. 28, 1936 the daughter of George and Marjorie (Woodworth) Harrison. She graduated from Colon High School with the class of 1954. Maxine was married to Emil George Warkentine on June 20, 1954 in the Leonidas Congregational Church. Together they operated a dairy farm north of Mendon until 1986, and then moved to the Angola area. Maxine was active in 4-H as a youth and supervised as an adult. She enjoyed sewing, crocheting, and kitting. She especially looked forward to spending time with her grandchildren.

Maxine is survived by her husband, Emil of Hudson, IN; four children, Linda (Bob) Thompson and Kathy Warkentine both of Mendon, Lyle (Kim) Warkentine of Angola, and Peggy (John) Barkley of Montgomery, MI; seven grandchildren; three great-grandchildren. She was preceded in death by her parents; and by a sister, Helen Lang.

In keeping with her wishes, cremation has been conducted. No services are planned at this time. Memorial donations may be sent to a charity of one’s choice. Memories and condolences may be shared with Maxine’s family at www.eickhofffuneralhome.com