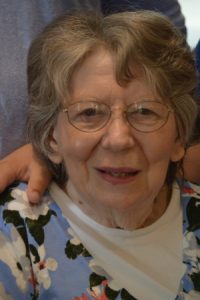 She was born November 16, 1933 in Lansing, the daughter of Willard Earl and Bernice (Smith) Halstead.

Norma graduated from Lansing Eastern High School, class of 1951, and went on to Michigan State University, from which she received a bachelor of arts in business in 1955 and a master of arts in 1956. She was a member of the women’s basketball team.

Two of her most significant life events occurred at Michigan State: Meeting her future husband, Raymond G. Surbeck, at MSU’s union hall, and attending the Rose Bowl game which the Spartans won.

She taught at the University of Windsor, Southwestern Michigan College and Glen Oaks Community College, and operated a business called “The Frugal Frog” in Three Rivers for 15 years.

Norma was a member of First Presbyterian Church Three Rivers/Centreville, where she served on Session as an Elder and on a number of church committees.

She was a treasurer of the Three Rivers Community Schools Board of Education, Three Rivers Economic Development Corporation, and the American Association of University Women. She was a founder and first President of ALL (Adventures in Lifelong Learning) at Glen Oaks Community College. She was also active in Three Rivers Woman’s Club, DOERS, Carnegie Center for the Arts, Kalamazoo Institute of Arts, Kalamazoo Art League, and Bethany Women’s Group.

Norma was always interested in improving and supporting education, active in three book groups, enjoyed traveling, architecture, the theater, and symphony concerts. She played bridge and enjoyed participating in cooking classes and getting together with friends for gourmet cooking with a variety of countries as themes.

Remaining to cherish her memory are her son, Kenneth John Surbeck of Portage; one daughter, Julie Ann (Timothy) Staffen of Portage; and one grandson, Landon Kenneth Staffen.

She was preceded in death by her husband; by one son, Glenn Raymond Surbeck; and by a sister, Janet Halstead.

In accordance with family wishes, cremation has taken place. A memorial service will take place in the spring.

Donations in Norma’s memory may be directed to First Presbyterian Church Three Rivers/Centreville or the Three Rivers Public Library. Envelopes are available at Hohner Funeral Home in care of her arrangements.