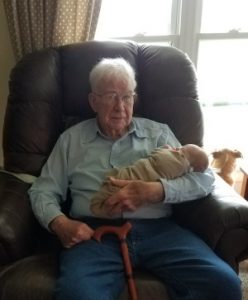 Raymond J. Young, age 91, of Constantine, passed away on Thursday, December 3, 2020 at Bowman Place in Three Rivers. Ray was born in Constantine on September 12, 1929, a son of Charles and Pansy (Roberts) Young. He graduated from Constantine High School in 1947 and went on to serve in the U.S. Army.

On May 1, 1954, he married Mary Tilford in Constantine; she preceded him in death on February 2, 2016. Ray was a owner operator truck driver in the steel industry for over 40 years. After retirement, he drove for E.L. Nickell Company. He and Mary enjoyed hunting and fishing, especially camping in the U.P. and Canada. He was a member of the Three Rivers Eagles and Trap Shooting Club.

He was preceded in death by his parents, wife, son Jeff Young, and sisters Julia Sutton and Ann King.

According to his wishes, cremation has taken place. Interment of ashes will be in Constantine Cemetery. Memorial contributions can be given to Kindred Hospice.

Arrangements were entrusted to Eley Funeral Home, Constantine. Please visit www.eleyfuneralhomes.com to sign Ray’s online guestbook and to leave messages for the family.