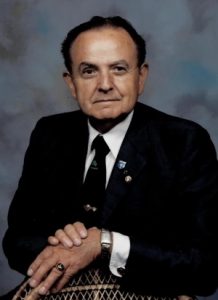 He was born in Marcellus on June 2, 1922, the son of Cloyd and Mabel (Gearhart) Swartz.

After graduating from Marcellus High School with the Class of 1940, Willard proudly served his country in the U.S. Army.

Following 10 years of employment at Fairbanks-Morse Co., he worked for almost 38 years as a machinist at Armstrong International.

Willard’s travels included all 83 counties in Michigan, 50 United States, six continents, 11 World Fairs or Expos, and – in 1973 – around the world.

He volunteered with the Amish, Commission on Aging, church, friends, neighbors and veterans.

He was preceded in death by his parents; a brother Harold Swartz; sisters, Mary Butchbaker and Florence Cooper.

A funeral to honor Willard’s life will be held on Monday, January 4, 2020, at 1:00 p.m. at Hohner Funeral Home, 1004 Arnold St., Three Rivers with Willard’s pastor, The Rev. Heather McDougall, officiating. Visitation will precede the service beginning at 12:00 noon. Social distancing guidelines will be followed.

Military honors will be conducted at the funeral home under the auspices of American Legion Hice-Shutes Post #170.

Willard will be laid to rest in Marcellus Cemetery.

To make a lasting gift in Willard’s name, please consider First United Methodist Church or the St. Joseph County Commission on Aging. Envelopes are available at the funeral home in care of Willard’s arrangements.