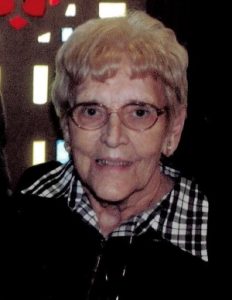 She was born on December 22, 1932 in Constantine, the son of Kenneth L. and Rachel (Kauffman) Spade.  Beverly was lovingly raised by her adoptive father, Clyde O. Mohney, after her biological father passed away at the age of 22.

Beverly was a cheerleader at Three Rivers High School from which she graduated in 1951. After raising her family, she went on to Western Michigan University where she earned her bachelor’s in education.

She wed her beloved Elwin Ruggles on August 24, 1952 in the 9th Street Methodist Church, Three Rivers, by The Reverend Harold Jacobs. High school sweethearts, Beverly and Elwin were happily married for 68 years before his passing on November 4, 2020. The couple had never been apart except for his basic training; after that time, she moved to Pittsburgh, Pa. to be near him.

She adored her grandchildren and could often be found helping with babysitting. She also spent many years teaching Sunday School at the Three Rivers Church of the Nazarene.

Beverly was preceded in death by her husband, Elwin; parents; and beloved daughter-in-law Melody (Shoemaker) Ruggles.

According to family wishes, cremation has been conducted. A graveside service will be held Tuesday, January 26, 2021 at 1:00 p.m. at Riverside Cemetery in Three Rivers with Pastor Rich Saunders of the Three Rivers Church of the Nazarene officiating. Social distancing guidelines will be in place.

Memorial donations in Beverly’s name may be directed to the American Cancer Society. Envelopes are available at the funeral home.