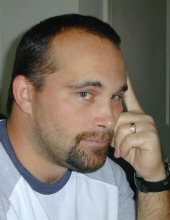 Christopher B. Wilson, age 43, of Sturgis, passed away Saturday, January 9, 2021 at Bronson Methodist Hospital in Kalamazoo.
He was born June 16, 1977 in Coldwater, a son to Ronald and Brenda (Tullos) Wilson.
Christopher’s early years were spent in Bronson, MI and he moved to Sturgis during high school and graduated from Sturgis High School with the class of 1997.
He was a veteran of the U.S. Army and had been employed as a foreman for Zickafoose Tree Service before he was forced to quit due to his failing health.
He enjoyed motorcycles and paintball.
On April 8, 2000 in Sturgis, he married Tricia Sehy who survives along with his 4 children: Zachary, Kristen, Brooke, and Hailey Wilson; his parents: Ronald and Brenda Wilson; a brother: Anthony Wilson; and a sister: Leslie Powell.
He was preceded in death by his grandparents: Alice and Ed Carvey, a brother: Steven Wilson, a nephew: Andrew Elliott, and a brother-in-law: Michael Elliott.
Friends and relatives may call from 10:00 to 11:00 A.M. on Wednesday, Jan. 20, 2021 at Holy Angels Catholic Church, 402 S. Nottawa St., Sturgis, MI 49091 where a Memorial Funeral Mass celebrating the life of Christopher B. Wilson will be held at 11:00 A.M., Wednesday, immediately following the visitation.
Interment will follow in Sturgis Memorial Gardens. Memorial donations in his memory may be directed to the Wilson Children’s Benefit Fund in c/o: Maria Clementz, Farmers State Bank, 809 W. Chicago Rd., Sturgis, MI 49091.
His obituary is also at www.hackmanfamilyfuneralhomes.com where personal messages of support may be left for the family.