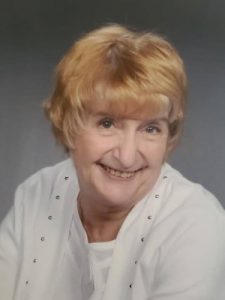 She was born November 24, 1946 in Mishawaka, the daughter of Lawrence and Adabele (Kruger) Johnson.

Darla worked in inventory and logistics for Republic Roller and Kirsch, and worked at Three Rivers Public Library.

She loved her church, her family, and volunteering in and around the community. She attended Immaculate Conception Catholic Church, and served as a board member and volunteer for Three Rivers Pregnancy Helpline.

Darla is survived by her husband, Frank Smith, whom she married on January 7, 1965; two sons, Thomas “Tom” Smith and Robert (Lisa Walorski) Smith; and one brother, Richard Krillenberger.

She was preceded in death by her parents and one brother, Bradford Holmes.

According to family wishes, Darla has been cremated. Visitation will be held Tuesday, January 19, 2021 at 9:30 a.m. at Hohner Funeral Home, 1004 Arnold St., Three Rivers. A Rosary will be at 10:00 a.m. at the funeral home, followed by a mass at 11:00 a.m. at Immaculate Conception Catholic Church, 645 S. Douglas Ave., Three Rivers, with Fr. Rajain Mathias officiating.

Donations in Darla’s memory may be directed to Three Rivers Pregnancy Helpline. Envelopes are available at Hohner Funeral Home in care of her arrangements.