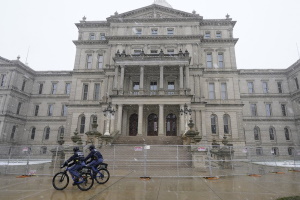 Gov. Gretchen Whitmer activated the National Guard, the state police continued to augment its presence at the Capitol and crews installed a 6-foot, chain-link fence around the 142-year-old building before expected protests ahead of President-elect Joe Biden’s inauguration.

The Legislature on Friday also canceled session next week, citing law enforcement’s concerns about “credible threats regarding events” at the Capitol.

Michigan State Police Col. Joe Gasper said an unknown number of demonstrators were expected to gather on the grounds Sunday, a week-and-a-half after the deadly breach by a mob of President Donald Trump’s supporters at the U.S. Capitol. Troopers were being mobilized from across the state and will be joined by the National Guard and local law enforcement.

Biden will be inaugurated Wednesday, when protesters also may be in Lansing.

“I assure you that we take our responsibility for safeguarding the Capitol very seriously,” Gasper said during a news conference. “Together with our law enforcement partners, we are prepared for the worst, but we remain hopeful that those who choose to demonstrate at our Capitol do so peacefully, without violence or destruction of property.”

Increased state police staffing at the Statehouse will last through at least mid-February, he said. Ground-level windows at a nearby state building that houses the governor’s office were boarded up. It was believed to the first time such fencing has been positioned around the Capitol in decades.

Maj. Gen. Paul Rogers, adjutant general of the Michigan Army and Air National Guard, said Whitmer — at the request of local officials — had activated troops to help protect people, facilities and key infrastructure. He declined to say how many will be involved but said the response is “significant.” The governor also deployed several hundred Guard members to Washington, D.C., to help with security and traffic control related to the inauguration.

Several roads in Lansing will be closed Sunday to facilitate entry and exit downtown, where the Capitol and many government buildings are located.

Lansing Police Chief Daryl Green said he had reassured concerned business owners and religious leaders that the city is prepared. He encouraged people without a specific reason to be downtown to stay home.

“We believe firmly in your expression of your First Amendment rights and your Second Amendment rights,” he said of potential demonstrators, who may be armed. “We just ask that do it safely and that you respect our city and respect our state Capitol.”

At least one paramilitary group told a TV station it planned to demonstrate at the Capitol on Sunday but later appeared to back away, telling Lansing City Pulse it was concerned that far-right Proud Boys intend to go to “cause maximum chaos.” The Associated Press could not reach the Southeast Michigan Volunteer Militia.

Whitmer, a Democrat, was the target of an alleged kidnapping plot by anti-government extremists in the fall.

In a statement, Senate Majority Leader Mike Shirkey and House Speaker Jason Wentworth — both Republicans — said no votes had been planned next Tuesday, Wednesday and Thursday, so they canceled legislation sessions “in an abundance of caution.”

“As we have said before, the riot at the U.S. Capitol last week was a terrible moment for our country,” they said. “We must be better than this as a nation, and that begins this week with what will hopefully remain peaceful protests and demonstrations in Washington, D.C., Lansing and around the country.”  (AP)

Police search for suspect in hit-and-run