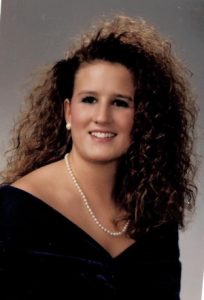 She was born October 23, 1971 in Three Rivers, the daughter of Teddy and Sue Ellen (Jackson) Hicks. She attended Three Rivers Schools, graduating with highest honors in Class of 1989. During high school she participated in band, where she was first chair trumpet player, along with playing basketball, volleyball, and a member of National Honor Society. Kristen was an avid animal lover, showing horses all throughout her 4-H years. Kristen went on to graduate from Ferris State University School of Pharmacy where she was a member of Lambda Kappa Sigma Sorority. She worked for Village Pharmacy for many years. They were a wonderful support throughout her struggle. Her co-workers and customers in Colon did a lot to support her, selling T-shirts, etc., and her friends in Three Rivers had two fundraisers for help thru difficult times.

Her life revolved around being a doting mother to her daughters and faithful dedication to her career. She had an infectious smile and was a hero to all her family and friends. She had endless courage and her legacy will be treasured in the hearts of all who were touched by her kindness.

Kristen leaves to cherish her memory two precious daughters, McKenzie Sue and Madelyn Jo Borst; her parents, Ted and Sue Hicks; sisters, Robin (Ray) Friel, Rebecca Weiderman, and Renee (Jeff) Draime. She had 14 beloved nieces and nephews who all adored her and 21 great-nieces and nephews; many extended family including aunts, uncles, and cousins.

Donations in Kristen’s memory may be directed to Hospice of Southwest Michigan or St. Joseph County Animal Rescue Fund. Envelopes are available and may also be sent to Hohner Funeral Home in care of her arrangements.