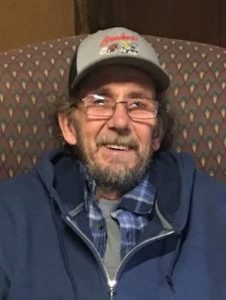 He was born on December 6, 1960, in Sturgis, the son of Arthur George “Sam” Roberts Jr. and Catherine Louise “Kay” (Stump) Roberts.

Mark worked in the construction industry and was a very talented woodworker. He enjoyed being in the outdoors – camping, fishing, hunting, kayaking, bonfires – as well as antiquing. He loved his animals, music and family.

He was preceded in death by his mother, Catherine Roberts, and by his sister, Renee Granzotto.

Funeral services will be held at 12:00 p.m. on Wednesday, January 6, 2021 at Hohner Funeral Home, 1004 Arnold St, Three Rivers, MI 49093 with Pastor Bob Anderson officiating. He will be laid to rest in Moorepark Cemetery.

Donations in Mark’s memory may be made to his family in care of Lanette Roberts. Envelopes are available at the funeral home in care of Mark’s arrangements.