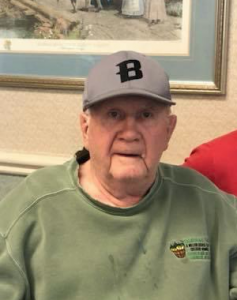 Omer L. Sheteron, Sr., age 88, of Constantine, passed away on Thursday, January 7, 2021 at Heartland Health Care Center in Three Rivers. Omer was born in Indiana on January 30, 1932, a son of Joseph and Minnie (Hunsberger) Sheteron.  He attended Constantine Schools. In 1953, he married Mary F. Salter; she preceded him in death in 1984.

Omer worked as a machinist for IAM in Elkhart for many years. He also previously worked for Continental Can.  He was a lifelong member of Howardsville Gospel Chapel and loved going hunting and fishing.

He was preceded in death by his parents, wife, son Harley Sheteron, brothers Howard, Eddie, and Donald Sheteron, and sister Evelyn Bowman.

According to his wishes, cremation has taken place.  No public services will occur. Interment will be in Constantine Township Cemetery.  Memorial contributions can be given to Howardsville Gospel Chapel.