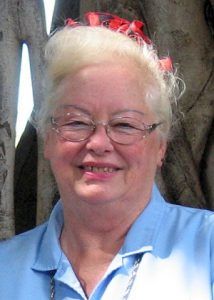 Pauline was born on October 27, 1933, in Frankfurt am Main, Germany, to Frieda Bechtold and Karl Weiss. She graduated in 1951 from Trade School sales in Germany. Pauline met George Benes while he was stationed in Frankfurt, and when her brother brought him home to play poker, he played “footsie” with her under the table. They married May 14, 1956.

After moving to the U.S.A in 1958, she worked as a waitress at Klaus’s Restaurant in Cicero before opening Pauline’s Delicatessen from 1959 to 1966. She and her husband George were also self-employed in the real-estate business.

She was preceded in death by her husband, George F. Benes, and a brother, Lorenz Weiss.

Pauline was first and foremost a proud German woman. She cared deeply for her friends and family and was fiercely loyal to them. One of her greatest joys was cooking and she spent hours preparing food and teaching her family how to cook from scratch. After completing her certification from the German Consulate, she taught German School from 1963 to 1990. Pauline loved German Shepherds and was a member of the German Shepherd Dog Training club for 14 years. She trained her dog, Astor, through novice obedience trials and tracking certification. She was also a member of the Colon Kiwanis Club and the Colon Lions Club.

Shipper Funeral Home in Colon is assisting the family with arrangements. A private family service will be held in memory of Pauline with a celebration of life to follow at a later date. If you would like to honor Pauline’s memory, donations may be sent to Colon Lions Club.

Many thanks to those who reached out the past few weeks and a special thank you to Rich with Angels Grace Hospice for his care, guidance and friendship. Online condolences may be made at Schipperfuneralhome.com.