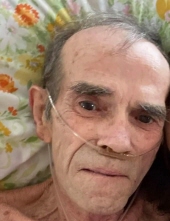 Jack L. Sears Sr., age 77, of Sturgis, passed away Friday morning, Feb. 26, 2021 at the home of his nephew, Rick and Violet Sears, who have been wonderful care givers to Jack over the last 3 weeks.
He was born July 11, 1943 in White Pigeon, a son to the late Joseph and Marie Sears.
On Jan. 27, 1962 in White Pigeon, he married Marylou Nelson. She preceded him in death June 12, 2018.
He has been a resident of St. Joseph County most of his life except for about 10 years when he and Marylou moved to Irons, MI.
Jack had worked for General Motors in Three Rivers, for many years.
He enjoyed fishing, gardening, and his passion in life was hunting. He would hunt anything and taught his children and grandchildren how to hunt. He also canned many of the vegetables and fruit from his garden.
Surviving are one son: Jack L. “Corky” Sears Jr. of Sturgis; 6 grandchildren; 3 great-grandchildren; one brother: Bob Sears; 2 sisters: Marie and Barbara; a brother-in-law: Irvin (Linda) Nelson of Burr Oak; and a sister-in-law: Kathy (Rich) Yeckley of Sturgis;
He was preceded in death by his parents, wife, daughter: Cynthia Brundige, a son: Matthew S. Sears, a grandchild, 2 great-grandchildren, and 4 brothers: Joe, Jerry, Mike, and Sonny.
According to his wishes, cremation has taken place. A private memorial graveside service and burial will take place at Burr Oak Cemetery with Richard Yeckley, officiating.
His obituary is also at www.hackmanfamilyfuneralhomes.com where personal messages of support may be left for the family.