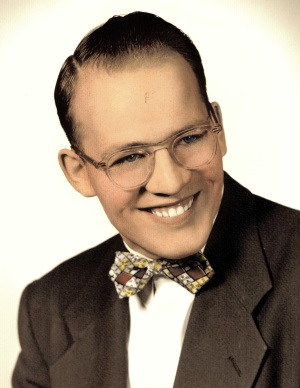 William Henry Hoeflinger, Jr., age 94, of Three Rivers, passed away surrounded by his loving family on Sunday, February 28, 2021 at his home.

William (Bill) was born in Mishawaka on February 19, 1927, five minutes prior to his twin, Barbara Jean, to William Henry and Flossie Mae (Voelker) Hoeflinger, Sr.

In 1941, the Hoeflingers moved to Lansing, where Bill graduated from Lansing Eastern in 1945. He was drafted and served in the U.S. Navy just after World War II. The Hoeflingers are proud of his service. Coming home on leave, he discovered his sister, Catherine, had been praying fervently for him to give his life to Christ. She approached him one more time, and while together, Bill prayed to accept Christ as his Savior. He always stated that this was the best decision he ever made in his life, and he gave his life to Christ to minister in any way God asked. After graduating from Grand Rapids School of the Bible and Music in 1953, he married his college sweetheart, Naomi Beryl (Case), on June 30, 1953.

During his life, Bill was a jack-of-all trades. His jobs included furniture, glass, tools and die, teaching, and managing. He taught himself plumbing, electrical wiring, painting, framing and woodworking, automobile mechanics and could fix almost anything. In the after hours, you would find Bill leading worship, singing, serving on school and church boards, volunteering with youth and children (his love), playing with his, and all the neighborhood children – even after dark. He made himself available to help where needed – whether car, home, bicycle repair, or just to lend a listening ear. After retirement, for 5 years, Bill and Naomi served as Director of Tri-State Bible Camp in Montague, New Jersey.

His real calling in life was music ministry. At every church he attended, he led congregational singing and the choirs while Naomi played the piano for him. This was always a volunteer labor of love for both of them and they enjoyed it immensely. Other activities he enjoyed were reading, completing puzzles (the harder the better), deer hunting, fishing and word puzzles. He always enjoyed a good bonfire! If he could do any of these things with his children, grandchildren and great-grandchildren…it was all the better! Sledding, ice skating and playing outside were treasured times and it couldn’t be better than when he was doing it with his “pals.”

Anyone who knew Bill could count on his contagious joy, love of life, and love of laughter. His mind was an ongoing joke book, and after a local joke convention, he decided to number his. Yell out any number, and close family and friends will laugh hysterically. He enjoyed creating skits, games, and scavenger hunts but will mostly be remembered for his Doo-lolly Wahoo game, the Enlarging Machine (as Professor Hinklehoff-Humperdink of Hamburg, Germany with his ping pong eyeballs), his smiley face collection and the trademark smiley pin he always wore in his jacket.

So where does one find this kind of joy and happiness? Bill daily read and studied the Bible and followed after God’s own heart. The joy of the Lord filled him so completely that even in the roughest of times, people watching would ask and he always shared that his faith in God was the driving force of his life. A lifetime quote that hung on his study wall was, “Only one life ‘twill soon be past, only what’s done for Christ will last.” – Charles Studd

He was preceded in death by his parents, William Henry Sr. and Flossie Mae; his brother, George; and his sisters, Catherine, Betty, Ruth and Marilyn; and his son-in-law, Greg Hotchkiss.

“Can’t never did anything.”

“If you think I’m kidding, just try me.”

“Leave it better than you found it.”

“Put it away while it’s in your hands.”

“It won’t be long now. That’s what the monkey said when he backed into the electric fan.”

“WHO left the screwdriver in the sandbox?”

“My sufficiency has been suffonsified.”

Visitation will be held from 11 AM to 12 PM on Saturday, March 6, 2021 with service at noon and a luncheon following. This will take place at Bethany Chapel, 15130 Millard Road, Three Rivers, Michigan 49093 with Pastors Paul Pierucki and Dan Boyce officiating.

Memorial donations in his memory may be directed to Tri-State Bible Camp, 2 River Road, Montague, New Jersey 07827. Sympathy gifts may also go to Naomi for her future by contacting Roger Hoeflinger.