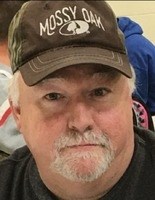 Kevin Ray Smith, age 56, of Bronson passed away Tuesday, April 20, 2021 at Ascension Borgess Hospital due to complications of Covid-19.
A funeral service will take place at 2:00 pm on Saturday, April 24, 2021 at Pleasant Hill Missionary Church with Pastor Mark Case of California Corners Community Church officiating. Interment will follow at Pleasant Hill Cemetery. Visitation will be Friday, April 23, 2021 at Dutcher Funeral Home in Bronson from 4:00 to 7:00 pm. Masks for both the visitation and funeral will need to be worn.
Kevin was born April 2, 1965 to Fred and Vera “Charlene” (Black) Smith, Jr. in Sturgis. He was a 1983 Bronson High School graduate. Kevin was a hardworking man, spending many years at Western Rubber Consolidated, then he opened his own business LKS Auto Body for 20 plus years, and most recently was working at Burr Oak Tool & Gauge as a machinist. On April 25, 1986 he married the love of his life, Lori Wonders in Burr Oak.
Kevin was a man of many interests. Doing auto body work was a life-long passion. He enjoyed hunting, especially going deer hunting, shooting firearms, and going mushroom hunting. Kevin spent a lot of time at the family cabins in Baldwin, where he also did 4 wheeling and riding in his Razor. He also did a lot of home building and construction work for his family. His true joy in life was being around his family, especially his grandchildren.
Kevin is survived by his wife of almost 35 years, Lori Smith of Bronson; his children Dustin (Danielle) Smith of Bronson, Kristin (Stephen) Riley of New Paris, IN, and Michael (Melissa) Smith of Bronson; his siblings Gerald (Sharon) Smith of Bronson, Darl (Teresa) Smith of Coldwater, Roland Smith of Coldwater, Rodney (Sheryl) Smith, Jody (Robert) Collins and Gregory (Amy) Smith all of Bronson; his grandchildren Hanna Smith, Ella Travis, Caden Smith, Brock Riley, Liam Travis, Braylee Riley, and Reid Smith; many nieces & nephews; and his long-time friends Frank (Shelia) Beary. He was preceded in death by his parents; his brothers Terry (Connie) Smith and Lynn Smith; his niece Chantelle Smith; and his great, great nephew Andrick Dickey.
Memorials may be directed to St. Jude Children’s Research Hospital. www.dutcherfh.com