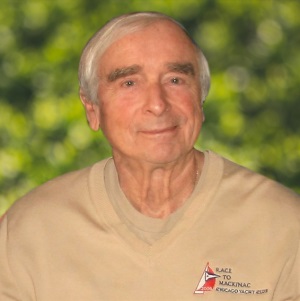 It is with great sadness that the family of William “Bill” Chase announces his passing on Friday, June 25, 2021, at his Corey Lake family home of 91 years and the only place he would have wanted to be, surrounded by his wife Charlene, son Curtis, daughters Sandra and Jennifer, and his beloved companion poodle Hannah.

Bill was born July 30, 1930, in Oak Park, Illinois, and attended Oak Park and River Forest High School, where he met his sweetheart bride of nearly 67 years, Charlene Lois (Johnson). While growing up in Oak Park, he couldn’t wait to spend any chance he could at his family’s lake home on Corey Lake near Three Rivers, which he referred to as his paradise. Bill shared the stories of the seven-hour journey from the Chicago-area to the lake, yet was worth every minute spent to be on the water, fishing, swimming, sailing and boating. He later perfected his love of water skiing, including teaching beginners and his participation in Corey Lake water ski shows. His love for the lake is instilled in his children and grandchildren.

With a love for water, he joined the swim team in high school and continued his swimming career while at North Central College, in Naperville, Illinois.

Before relocating to Michigan, William operated a successful vending company and home security company along with his son while residing in River Forest, Illinois.

With a fondness for community service, he belonged to numerous clubs and served on many boards including Oak Park YMCA and Service Club of Oak Park. His passion for service continued after he moved to Michigan, serving on the board of YMCA Camp Eberhart, and also an active member on the St. Joseph County Planning Commission, Fabius Township Board of Appeals, St. Joseph County Conservation Club and Rotary Club. He also served as President of the Corey Lake Association, and Commodore of the Corey Lake Yacht Club.

Not only was he an active member in business and his communities, he was active in many hobbies in which he excelled. Spending time duck hunting with his uncle in Michigan, he perfected his talents which led him to become a professional skeet shooting instructor at Sunset Ridge Country Club, in Northbrook, Illinois, where he taught enthusiasts and celebrities, including Paul Harvey. He also shot competitively, winning several trophies at Oak Park Country Club.

He also enjoyed woodworking and restoring antique furniture. But none more special than a complete restoration of a 1955 Chris-Craft, with his son, born of the same year. “On Golden Pond” led many a Fourth of July boat parade, a wonderful memory for his family and those who knew him.

Not ready for retirement after relocation to paradise, he went to work for the Michigan Department of Transportation for twelve years, where he enjoyed being a part of the infrastructure keeping roads safe for travel until his retirement at age 72.

Favorite memories of “Bill” by fellow Corey Lakers included his meticulous attention to detail growing the perfect lawn and manicuring the steep hill facing the lake, with an engineered lawnmower on ropes, which he maneuvered up and down the hill, donning a red bandana, jeans and bare feet. King of the raft was another special pastime, and he enjoyed every summer spent with the kids on the lake, being “everyone’s dad.” When not in white pants, nor sporting a bandana, he enjoyed a style like no other, from western wear to formal attire.

He and Charlene enjoyed nothing more than playing host to guests from out of town, opening their home to many for entertaining all year round. They also enjoyed attending many social and charitable events.

William’s life spanned six generations at Corey Lake and is survived by his wife Charlene, three children, Curtis and Sandra of Three Rivers, and Jennifer of Chicago, Illinois. He was the proud grandfather of twin boys, Kyle and Matthew (Rachel) Bloch and great-granddaughter, Finley Jane, who all reside in the Upper Peninsula of Michigan. He also leaves his brother James (Patricia) of Three Rivers, and sister Mary of Montana; two sisters-in-law, Carole White of McHenry, Illinois and Dorothy Cole of Highland Park, Illinois and many nieces and nephews, and great nieces and nephews.

William loved his time with family and cherished being surrounded by his family at the dinner table, toasting each meal together. In his honor, please join us in a toast with your families to celebrate his legacy and for you to remember what made him special to you.