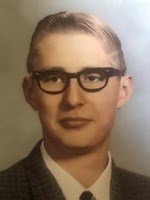 On Wednesday, July 28, 2021, Kerry Duane Andrews, loving husband to Pat and father to three children, passed away at age 71.
Kerry was born on October 30, 1949 in Sturgis to Victor and Ruth Andrews. He married Pat on January 18, 2003. He had a daughter, Kari Lynn (Rex) Scare, a son, Jamie (Barbara) Andrews, and a step-son, Dale Ledbetter.
A veteran of the Vietnam War, Kerry served in the United States Army as a sharpshooter and rifle expert. He received a Vietnam Service Medal with two Bronze Service Stars, a National Defense Service Medal, a Republic of Vietnam Campaign Medal, a Combat Infantryman Badge, an Air Medal, and a Bronze Star Medal.
Kerry never knew a stranger and was best known for his friendliness and sense of humor. Whether it was while playing with his radio-controlled airplanes and cars, driving truck for VanEerden, or farming, Kerry talked to anyone and everyone and always enjoyed sharing a joke or story.
Kerry was preceded in death by his step-son, Dale. He is survived by his wife Pat, his children Jamie and Kari Lynn, his sisters Kay (Larry) Mayer and Karen (Jeff) Owen, four grandchildren (Tory and Rieley Ledbetter; Jonathan and Richard Scare), and three great-grandchildren (Aliyah Fawley; Chance and Clarity Scare).
A military graveside service with honors will be held at Crown Hill Cemetery on East Lake Street in Knox, IN at 2:30PM (Central Time) on Saturday, July 31st.