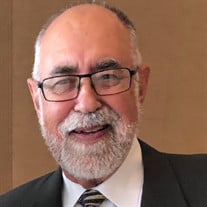 Michael was born in Inglewood, California on August 22, 1949 the son of Harold Jean Keenum and Betty (Sinkular) Hall.

On April 20, 1979, in Orland Park, Illinois he married the love of his life Kathleen Mary (Hahn) Keenum, who survives him in death.

Michael was a physical therapist, working for many years at his own private practice after previously serving our country in the United States Air Force from 1968-1972.

Michael was a member of the Experimental Aircraft Association, the NRA, the Patriot Veteran Motorcycle Guard, and President of the Life Line Pilots.

Michael is preceded in death by his parents Harold Keenum and Betty Hall; father-in-law Nevin Hahn.

Cremation has taken place. A Celebration of Life will take place at a later date. Memorial donations may be directed to the National Kidney Foundation. Online condolences may be left at www.materralstonfuneralhome.com.