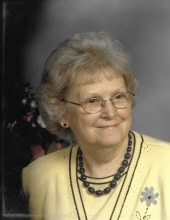 She was born July 1, 1929 in LaGrange County, IN a daughter to the late Perry and Marie (Troyer) Hostetler.

Doris has been a resident of Sturgis for the past 16 years and had previously resided in Burr Oak for over 38 years.

Doris retired from Kirsch Company where she had been employed for over 25 years. She then worked part time for Fairview Living Centre in Centreville for 15 years.

She was a member of the First United Methodist Church in Sturgis and she enjoyed playing cards with friends, gardening, and flowers. She was also an avid Detroit Sports Fan and enjoyed watching the Tigers, Pistons, and Lions.

Cremation will follow the visitation and interment will take place at a later date in Burr Oak Cemetery. Memorial donations may be directed to the American Diabetes Association, envelopes are available at the funeral home.

Her obituary is also at www.hackmanfamilyfuneralhomes.com where personal messages of support may be left for the family.