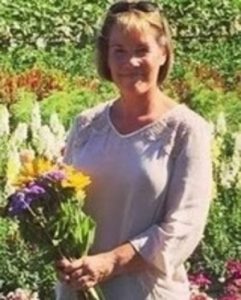 She was born April 22nd, 1961 in Rockford, IL; the first child of Albert G. Ehlers and Judith L. (Barrett) Ehlers. Maggie graduated from Olympia High School in Stanford, IL in 1979, where she was an academic high achiever with a penchant for science. On the Homecoming and Prom courts, Maggie was voted most congenial and stood out as a cheerleader for the wrestling squad. Following high school, Maggie attended DePauw University in Greencastle, where she majored in Biology and earned a Bachelor’s of Science in 1983. She was also a celebrated member of the Alpha Phi Sorority. She then moved to Michigan to become the Education Coordinator for Binder Park Zoo in Battle Creek. Soon after, she met and married Tom Kool in 1988 and they settled in Sturgis. They welcomed three children–Patricia, Linda, and Michael–her greatest loves.

She was a very active volunteer in countless fundraisers for the kids and their school. After her children grew up, she traveled the country inspired by new passions with an avid interest in learning. She had the golden touch, having blessed friendships along the way. She started a few successful companies growing flowers, peonies being her favorite! She also returned to education as a straight A student in a phlebotomy program, in progress when she passed.

She was preceded in death by her father, Albert Ehlers, in 2005.

She is survived by her mother, Judith Ehlers; her siblings, Susan and Michael [Elizabeth] Ehlers; her children, Patricia [Shawn] Wells, Linda [Joe] Gest, and Michael [Grace] Kool; and her grandchildren, Jasim, Liam, and Baby Gest due December 2021.

In accordance with her wishes cremation has taken place. The family will receive friends from 2:00 to 3:00 P.M. Friday, October 22nd at the First Presbyterian Church in Sturgis where a memorial service celebrating and honoring the life of Margaret “Maggie” Kool will immediately follow the visitation at 3:00 P.M. Maggie’s brother-in-Law Pastor Ronald Kool will officiate. A continued time of fellowship and coffee hour will follow the memorial service in the church fellowship hall.

The family suggests those wishing to make a memorial donation in Maggie’s memory consider the Lake Area Christian Schools 63590 Borgert Rd., Sturgis, MI 49091 or the educational/floral/medical cause of your choice.