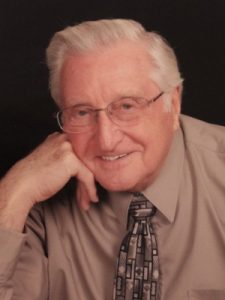 Ed was born in Chicago on August 11, 1926. He was the youngest son of Charles and Susan (Bielcik) Ondrejka.

Ed grew up on the south side of Chicago and joined the Coast Guard when he was 17. From there he went into the army where he was in the Pacific Theater and drove a tank in WW II.

On August 27, 1960 he married Beverly Powers of Chicago. They resided in South Holland, IL where they raised their 3 children. After he retired, they moved to Three Rivers where he enjoyed fishing, boating, gardening, and listening to polka music on Corey Lake. He also cherished spending time with his grandchildren Megan, Mary, Kevin, Madeline and Lydia.

After the war, Ed used his veterans benefits to become a tool and die maker. For the next 40 years he applied his skills at Ford Stamping Plant in Chicago Heights, IL.

His dedication to his family, faith, and work along with his strong personality made him the patriarch who led by example. He will be missed by all the lives he touched.

In lieu of flowers, donations in Ed’s memory may be directed to Immaculate Conception Catholic Church. Envelopes are available at Hohner Funeral Home.