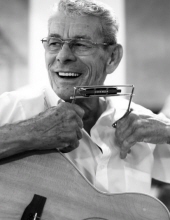 Eli Schwartz, age 80, of Bronson, passed away Saturday morning, November 6, 2021 at the home of a dear friend in Three Rivers.
He was born May 7, 1941 in Burton, Ohio, son of the late Christian “Butch” and Elizabeth (Hostetler) Schwartz.
Eli resided in Bronson since 2013, coming from Sturgis.
On February 28, 1960 he married Clara M. Mast at the Locust Grove Mennonite Church in Burr Oak. This marriage temporarily ended in divorce. He then married Connie Harvey, on December 24, 1984. This marriage ended in divorce. On June 15, 2010, he remarried Clara, and was by her side until her passing on September 26, 2020.
Eli had many talents, and was considered a Jack of all trades. He was a welder, carpenter, mechanic, gardener and grill master, but it was his musical abilities that endeared him to the hearts of so many. Eli loved people, and never met a stranger, he could often be heard sharing a personal testimony of God’s Love, Mercy, and Forgiveness to anyone with a listening ear. He will be deeply missed by family and friends alike. Eli was also a small business owner/operator for several years, and was employed by Colon Community Schools, and Oak Press in Sturgis.
He was a member of New Beginnings Community Church in Sturgis, and for many years had performed with the Wasepi Bluegrass Gospel Singers.
Eli is survived by his children: Duane (Diane) Schwartz of Howe, Dean Schwartz of Bronson, Debra (David) Lehman of Centreville, Tammy (Kevin) Gascho of Three Rivers, Derek (Jamie) Schwartz of Zeeland, Lisa (Christian) Huber of Wheatfield, Indiana, Johnathan Schwartz of Three Rivers, Heidi Schwartz of Burr Oak, Robert Schwartz of Kalamazoo and daughter-in-law: Stephanie Schwartz of Sea Grove, North Carolina; 20 grandchildren; 26 great grandchildren; brothers: Chris (Edna) Schwartz, Lester (Nanci) Schwartz, Ray (Sandra) Schwartz, John (Joyce) Schwartz and James (Gloria) Schwartz; sister: Barbara (John) Hooley, special friends: Lilah Blentlinger and Teddy Barrone, and many nieces and nephews.
He was preceded in death by his parents, wife; son: Robert Schwartz, son-in-law: Jason Wagner, sister: Marie Schwartz, and twin brothers: David and Levi Schwartz.
In accordance with his wishes cremation has taken place. A memorial service celebrating the life of Eli Schwartz will be held, Wednesday, 10 AM at Firm Foundation Ministries in Centreville. A private burial of his ashes at Locust Grove Cemetery in Burr Oak will take place at a later time.
The Hackman Family Funeral Homes of Sturgis is entrusted with the arrangements.
The family suggests those wishing to make a memorial donation in Mr. Schwartz’s memory consider the St. Joseph County Jail Ministry, P.O. Box 339, Centreville, MI 49032.
The obituary is also at www.hackmanfamilyfuneralhomes.com where we encourage relatives and friends to share memories and leave condolences for the family.