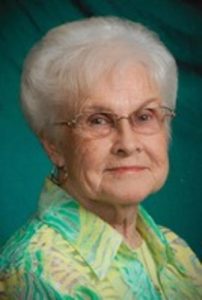 Georgiana Pfenning, age 92, of Sturgis, passed away early Friday morning, November 26, 2021 at Thurston Woods Villa in Sturgis.
She was born September 26, 1929 in Warren, Indiana daughter of the late Leo and Gladys (Sprowl) Harter.
Mrs. Pfenning resided most of her life in Sturgis and was a graduate of Sturgis High School with the class of 1947. She furthered her education at the Fort Wayne Beauty School where she earned a degree in cosmetology.
On March 15 1948 she married Max Pfenning in Angola. He preceded her in death July 17, 2005.
She retired from the United Telephone Company in Warsaw, Indiana following several years of dedicated employment. Prior to joining the telephone company she owned and operated Georgiana’s Beauty Salon in LaGrange.
Georgiana was a member of the First United Methodist Church in Sturgis since 2009.
Mrs. Pfenning was also a member of the Thurston Woods Guild and Garden Club, volunteered her time at the Thurston Woods Villa, enjoyed traveling, dining out, antiques and was an avid reader. Georgiana had interests and involvements but what she truly cherished was time spent with her family.
She is survived by one daughter: Linda (Les) Wheeler of Grand Rapids; one son: Ted (Teresa) Pfenning of Dublin, Ohio; three grandchildren: Theresa (Jeff) DeVries, Christopher Pfenning and Matthew Pfenning; two great grandchildren: Hannah and Jordan; Brother-in-law: Jim (Jean) Pfenning of Leesburg, Florida; sister-in-law: Sandra Pfenning of Howe, Indiana and many nieces and nephews.
The family will receive friends from 12:00 to 1:00 Thursday at the Hackman Chapel of Hackman Family Funeral Homes, 114 S. Nottawa St. in Sturgis where funeral services celebrating the life of Georgiana Pfenning will immediately follow the visitation at 1:00 P.M. A graveside committal will follow the service at the Riverside Cemetery in Howe, Indiana.
The family suggests in lieu of flowers memorial donations be directed to Thurston Woods Villa, 307 N. Franks Ave., Sturgis, MI 49091.
Relatives and friends are encouraged to share memories and condolences at www.hackmanfamilyfuneralhomes.com.