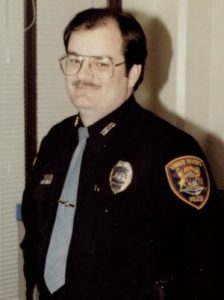 He was born August 18, 1960 in Muskegon, the son of Richard Sr. and Sandra (Schnipke) Maus. He graduated with the Class of 1978 from Orchard View High School, where he played tennis.

Richard worked various manufacturing jobs before moving to Three Rivers and attending the Police Academy at Kalamazoo Valley Community College. While at the Academy, he worked at the Twin County Community Probation Center.

Upon his graduation, he became a full-time police officer for the city of Three Rivers, working his way up to the rank of Detective/Sergeant prior to his retirement. He also served in the National Guard for 10 years.

Richard was preceded in death by his stepson, Jeremy Hall, and his stepdad, Daniel Roskoski.

Donations in Richard’s memory may be directed to the Three Rivers Police Department, Three Rivers Fire Department, or the Charity of One’s Choice. Envelopes are available at and also may be sent to Hohner Funeral Home in care of arrangements.