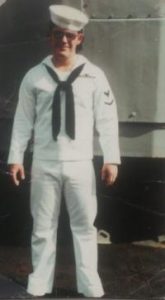 Andy passed away of natural causes on October 25, 2021, at his home in Three Rivers. He is survived by his children Amapola Sonora Grindel, William Miguel Grindel, and Cassandra Lee Grindel. Also survived by his former spouse Levi Caliso Grindel, brothers Dan, Scott, and Chris (Charlie) Grindel, and mother, Margaret Bock Grindel. He was preceded in death by his father William Henry (Hank) Grindel.

Andy was an avid outdoors enthusiast. He enjoyed a multitude of hobbies including amateur brewer of spirits, beekeeping, gardening/arborist, camping, fishing, and cooking. He was devoted to the care of his grandson, Carter, up to his final day on earth. He will be severely missed by family and friends. We all look forward to seeing him again at Heaven’s Gate. Farewell for now, Andy.

Services will be on Wednesday, November 3rd at 1 p.m. at Hohner Funeral Home followed immediately by a military service at Fairfield Township Cemetery in Marcellus. All are welcome and encouraged to attend.