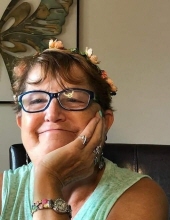 Barbara Arlene Weiderman, age 69, of Sturgis, passed away Saturday afternoon, December 25, 2021 at her home.
She was born August 10, 1952 in Coldwater, daughter of the late Arland “Bud” and Kathryn (Latta) Markley.
Barbara resided in Sturgis since 1951, coming from Bronson, where she was a graduate of Bronson High School with the class of 1970.
On July 17, 1971 she married James F. Weiderman at the Trinity Lutheran Church in Sturgis. He preceded her in death April 23, 2019.
Barbara owned and operated Simply Groovy in Sturgis and had been employed by Precision Speed in Sturgis and Full Circle Health Care in Burr Oak.
She was a member of the St. John’s Lutheran Church in Sturgis.
She and Jim were true enthusiasts of Volkswagens and were members of Volkswagen clubs and communities. She enjoyed traveling in their Volkswagen bus, attending and participating at car shows and making jewelry and crafts. Barbara had hobbies and interests but what she truly loved was time spent with her family, especially her grandchildren.
She is survived by one daughter: Kathy (Ken) McKinley of Bronson; one son: Matthew J. (Jody) Weiderman of Sturgis; step-daughter: Julie Barnhart of Washington, Michigan; eight grandchildren: Kiley Weiderman, McKenna Weiderman, Bryce Speelman, Darren Speelman, Liam McKinley, Cael McKinley, Ashley Barnhart and Brenden Barnhart; one brother: Charles (Sandra) Markley of Coldwater and several nieces and nephews.
In accordance with her wishes cremation has taken place. A celebration of life will be held at a later date to be announced.
The Hackman Family Funeral Homes of Sturgis is entrusted with the arrangements.
The family suggests those wishing to make a memorial donation in Mrs. Weiderman’s memory consider the American Cancer Society P.O. Box 22718, Oklahoma City, OK 73123.
Relatives and friends are encouraged to share memories and condolences at www.hackmanfamilyfuneralhomes.com.