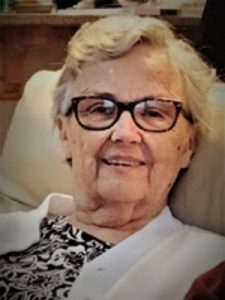 She was born December 10, 1937, in Rhinelander, Wisconsin, the daughter of Arthur and Mae Persell. Delores graduated from Lake Forest High School (Lake Forest IL), then attended secretarial school in Chicago. She excelled as an executive secretary at the Fireman’s Fund Insurance Company in Chicago.

She met her husband, Howard, on a blind date. They were married June 6, 1959, and enjoyed 61 years of marriage. Dee was often heard telling others “he’s the best thing that ever happened to me”. Howard and Dee started their family in Racine, Wisconsin, moving to North Reading, MA for several years, before moving to Sturgis in 1968.

While her priority was raising her children, she enjoyed several jobs over her years in Sturgis. These included First National Bank Travel Agency, the Sturgis Journal, and Harter Corporation. Dee was active in the Wiesloch exchange program, hosting many families and students who became life-long friends.

Dee and Howard also welcomed many foster children into the family while living in North Reading and Sturgis.

Upon retirement they moved to Las Cruces, NM where they enjoyed winters in the desert and summers in the mountains of Cloudcroft, NM. She was an active member of the First Methodist Church helping with the food and clothing pantry. She also enjoyed leading crafts at the senior center.

In 2015 they moved back to Michigan to be near family making Kalamazoo’s Heritage Community their home.

Throughout her life Dee was an avid card and game player, could organize and put on an event effortlessly, and had an eye for crafting and creating. Her beautiful smile will be missed.

She was preceded in death by her husband, Howard, and her parents.

Delores will be cremated and interred at Fort Custer National Cemetery with Howard.

A memorial service will be held at a later date. Memorial contributions may be directed to the Heritage Community of Kalamazoo Foundation, c/o Joldersma & Klein Funeral Home.