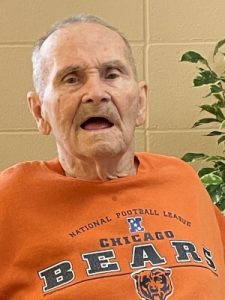 Harvey Lee Knavel, Sr., age 85, of Sturgis, passed away Monday morning, December 20, 2021 at Thurston Woods Village in Sturgis.
He was born June 17, 1936 in Sturgis, son of the late Robert and Goldie (Ballard) Knavel.
Harvey resided in the Sturgis and Burr Oak area all of his life.
On July 28, 1972 he married Emmy Lou Wheeler in Sturgis. She preceded him in death March 9, 2018.
Harvey retired from the Kirsch Company in Sturgis following many years of dedicated employment. He had also worked for Ken Perry Excavating and served as a police officer and fireman with the Village of Burr Oak.
Harvey was proud to have served his country in the U.S. Army during the Korean War from 1954-1957 stationed in Iceland earning the rank SP-3.
He was a member of Neuman-Wenzel Post #73 American Legion, Captain John J. Kelley Post #1355 VFW and Eagles Lodge #1314. He enjoyed camping, playing golf and riding motorcycles and he was a loyal avid fan of the Chicago Bears.
Harvey is survived by one daughter: Bambi (Bill Eckhardt) Herman of Sturgis; three step-daughters: Debra Dunlap, Patti Gene Dunlap and Billie (Ralph William) Wells all of Sturgis; two step-sons: Gary (Janell) Dunlap and Brett (Tammy) Dunlap both of Sturgis; 15 grandchildren; 29 great grandchildren; 10 great great grandchildren; one sister: Wendy and several nieces and nephews.
He was preceded in death by his parents; wife; son: Harvey Lee Knavel, Jr and brother-in-law: Eugene Wheeler.
In accordance with his wishes cremation has taken place. A memorial service celebrating and honoring the life of Harvey Lee Knavel, Sr. will be held at a later date to be announced. Full military honors will be conferred by Captain John J. Kelley Post #1355 VFW and the U.S. Army Honor Guard.
The Hackman Family Funeral Homes of Sturgis is entrusted with the arrangements.
The family suggests those wishing to make a memorial donation in Mr. Knavel’s memory consider Thurston Woods Village, 307 N. Franks Ave., Sturgis, MI 49091 or the charity of one’s own choice.
Relatives and friends are encouraged to share memories and leave condolences at www.hackmanfamilyfuneralhomes.com.