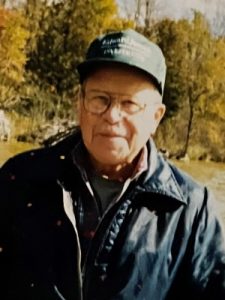 He was born January 27, 1927 in Detroit, the son of the late Wayne and Edith (Bullock) Snyder. He graduated from Constantine High School with the Class of 1945.

Lloyd worked for many years at American Electric Power, formerly Michigan Power, where he was lineman and managed substation maintenance. He eventually retired after forty years of service. Lloyd also served with the Constantine Fire and Rescue Department for 35 years, was a member of the Constantine Village Council, and molded young lives for several years as a Scoutmaster in the Boy Scouts. He enjoyed fishing and spending time with his children and grandchildren.

On September 9, 1955, he married Dorothy Zieler. Together they loved vacationing at their cottage up north and going to casinos.

He was preceded in death by his wife, Dorothy (Zieler) Snyder; son, Bill Snyder and sister, Ruth Snyder.

In lieu of flowers, donations in Lloyd’s memory may be directed to Thurston Woods Village of Sturgis and St. John’s Lutheran Church of Sturgis Building Fund. Envelopes are available at Hohner Funeral Home in care of his arrangements.