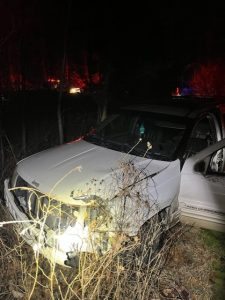 A Mishawaka man was injured after the vehicle he was driving was involved in a crash in Cass County’s Newberg Township.

Investigators said a car driven by 55-year-old Ryan McCourt was traveling east on Bair Lake Street when his vehicle exited the roadway and struck a tree. McCourt was transported to Elkhart General Hospital and reported in stable condition.