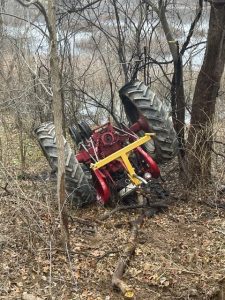 A Three Rivers-area man was injured after the farm tractor he was driving overturned last week in Cass County’s Newberg Township.

Investigators said a tractor driven by Darrel Martin, 42, sped up while coming down a hill. Martin told authorities he was unable to slow the tractor as it approached a curve in the road.

The tractor went off the road and overturned, authorities said, noting that Martin was able to get away from the crash site as the tractor caught fire.

Martin was transported to Bronson Hospital.